We will be updating our home page each week with a blog about the previous camp! But you don’t have to just ready about it, see what camps are still available for your child here. Enroll your child here.

This past week, the Art Spark studio was transformed into a magical fairy tale world for our Once Upon a Time Camp!  We began our camp by talking about familiar fairy tales and their different elements: beginning, setting, heroine, villain, minor characters, problem, solution, and ending. To plan and write our own fairy tale we asked questions such as:  Who are the characters in our story? Where do they live? Do they have special powers? Is there a bad guy? What problem(s) do the characters run into? How do they solve this problem?  Do they live happily ever after? After finding answers to these questions, the campers came up with the most amazing and fantastical stories! Both camps decided it would be fun to act out the fairy tales on the last day of camp for their parents, friends, and relatives.  Campers quickly got to work on creating costumes, murals, castles, tree houses, mystical animals, etc. Here are the two stories that the campers came up with all on their own:

The Four Princesses and The Evil Witchy-Poo
written by: 9-12 Campers

Once upon a time, there were five beautiful princesses.  The princesses had special powers.  They could heal animals with their lovely princess hats.  They had special animals that lived in their castles.  Over their castles there were talking rainbows!  They also had a mom named Queen Emily.  There was also a mean old witch named Witchy-Poo!  There was a beautiful rainbow diamond in the castle that kept the land beautiful.  The land there were cupcakes that grew on trees, colorful flowers, and different yummy fruits.  One day Witchy-Poo sneaked into the castle to steal the rainbow diamond that kept the land beautiful.  Uni the unicorn used her horn to cast a spell on the witch.  This spelled turned the witch into a lollipop!  Everybody ate the lollipop.  They got their rainbow diamond back forever and the land was beautiful again.  They all lived happily ever after.  The End!

The Best Friends
written by: 1-4 Campers

Once upon a time, there was a beautiful mermaid, a beautiful princess, and four lovely fairies.  The mermaid lived in the ocean, the princess lived in a castle, and the fairies lived in a tree house.  They were all very good friends.  One day they decided to go on vacation to Candyland, but when they left they forgot to lock their doors!  Mr. Mad Monster sneaked into their houses and stole their wands and magical mirrors!  In Candyland the friends met Mrs. Nice the fairy godmother.  Mrs. Nice had many animal friends: two bunnies, a bee, a cat, a bird, and a butterfly.  The animals told Mrs. Nice that Mr. Mad Monster stole their wands and magic mirrors.  The friends ran back home to catch Mr. Mad Monster.  Mr. Mad. Monster tried to runaway, but Mrs. Nice cast a spell on him and turned him into a rock! The friends threw the rock into the ocean and they lived happily ever after.  The End!

Here are a few photos from our Once Upon a Time camp, prepare to be dazzled by the magic of their fairy tales!

Playing in our fairy tale world! 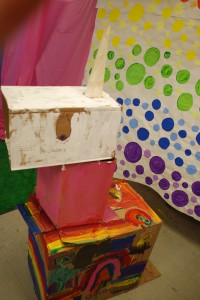