We will be updating our home page each week with a blog about the previous camp! But you don’t have to just ready about it, see what camps are still available for your child here. Enroll your child here.

Campers did not want to leave Art Spark Island when camp ended last Friday.  And honestly, who would want to?

When challenged with building a home out of materials that could be found on an island, campers found leaves outside our studio, and used them to build and decorate our home. 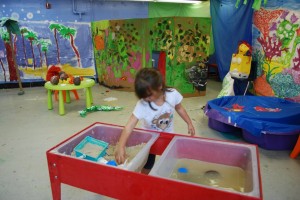 When campers had to think about what they would eat and drink, they knew that they would collect cocouts for coconut milk, and go fishing in the ocean! Campers used survival skills to make fishing poles to catch the fish, and built a fire to cook with.

Campers also had to think about what the landscape woud look like on Art Spark Island. They were certain it would be full of waterfalls and palm trees! 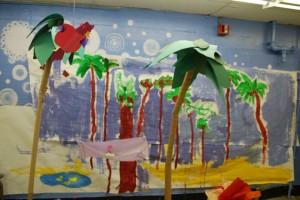 When we wondered what friends we would meet, we imagined that there would be a magical mermaid! 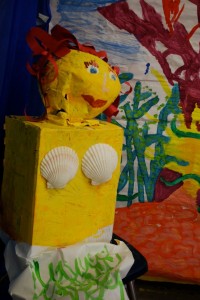 When campers were sad they were leaving, they documented their story of being stranded in a journal.

When camp was finished sparklers each had about 8 wonderful projects to take home.  And several large projects created as a team.  They learned techniques such as plaster molding, marbling paper, creating a map with clay, and so much more.  Questions were asked, answers were learned, and imagination was ignited.

We hope everyone has a fun and safe Independence Day!
Keep SPARKING imagination!
-Miss Emily